Q? How can i get my cat to stop scratching the furniture?

A. Smear catnip on your cat’s scratching post (if you don’t have one, get one!) so s/he scratches it instead.

Q? What are the benefits of giving my cat Soft Claws?

A. The benefits of giving pets Soft Claws are numerous, but the primary advantage of Soft Claws is that these nail caps help prevent destructive scratching. They prolong the life of owners’ furniture and hardwood floors, as well as help shield sensitive skin from sharp claws. For seniors and young children with sensitive skin, scratching is especially a problem.

Q? How can we keep our cat from scratching our carpet?

A. Believe it or not, but cats have their own individual scratching patterns and preferences, and most of them enjoy having more than one scratching post. Cats who scratch carpets are typically horizontal scratchers. There are scratching pads made for this purpose; some are in an inclined shape and others are flattened out. Suggest trying one of those, perhaps with a different surface material than the existing post Or alternatively try Soft Claws as its only slipping harmless nails caps on which prevent them tearing up your carpets.

Q? Please help with my kitten’s scratching and biting behaviour?

A. Hands are not cat toys, scratching and biting by kittens is commonly caused by poor play habits early on. It is very important that you do not “roughhouse” your kitten in the manner you might use with a dog.Playing rough with your kitten will teach him that hands are toys – a lesson that will be harder to break later on.
Trim His Claws Claw trimming should be done regularly. There is no need ever to declaw a cat because of scratching behaviour.
Use Soft Claws (Or Soft Paws – the same product as sold by veterinarians.) Soft Claws are plastic “Nail Caps” for cats, which take the sting out of scratching and minimise damage to furniture.
Redirect His Attention Often playful biting of hands or feet occurs simply because your cat is bore, and is looking for a play object. Give him 15 minutes of active play with an interactive toy. Da Bird is a great choice. For two years it has defended its position as the top interactive toy as well as the top overall toy in my Top Picks. Alternatively, try a laser-beam type toy that kittens can chase and pounce on, or even one of those “gloves” with very long dangling “fingers.”
“Scruff the Cat”
This is one of the most effective forms of discipline of cats, but should only be used as a last-minute resort. It mimics the punishment given a kitten by his mother when he became unruly. Grasp him by the scruff of the neck and firmly push him down toward the floor, while saying “No!” in a firm tone of voice. Hold him in this position for only three or four seconds and release. You will see and feel him visibly relax.

Q? How can I get my new kitten to leave my adult cat alone?

A. Quite often older cats and kittens don’t make a good mix, especially when the older cat has been the single “owner” of the household. The fact that they’re both males exacerbates the rivalry in your case. Even neutered males are very territorial, and it’s plain to see that your older cat resents the fact that the kitten has taken over his territory indoors.
It’s also very normal for your kitten to want to play. Play-fighting is essential for kittens; it’s how they learn to take care of themselves when they are older, and you’ll see kittens in a litter engaging in this activity as soon as they are aware of each other.
For these reasons, I always suggest using care when bringing a new cat into a home. Under the present circumstances, it is unlikely that your two cats will be able to peacefully co-exist until the kitten is much older. In the meantime, the intrusion is unsettling to the adult, who was after all, there first. You originally had no choice, of course, since the kitten obviously needed a home when you rescued him.
As I see it, you presently have two options:
Find a new home for the kitten, either one with other kittens, or one where he will be the only cat.
Adopt another kitten, so your young guy can get the exercise and play he needs, without bothering the adult.

Q? Does anyone know what Cat Scratch Disease/Fever is?

A. Wikipedia says that cat scratch disease is caused by a bacterium. It is most commonly found in children one to two weeks after a cat scratch or bite. – tender lymph nodes, slight fever, chills, headache, backache, abdominal pain, not feeling well, and so forth. It usually gets better by itself in about a month.

Q? I heard that Soft Claws is cruel, why?

A. Soft Claws is similar to many other products that we use on our cats such as collars. Many people instantly think that Soft Claws is a terrible, horrid and cruel idea; however these people are forgetting that putting a small piece of plastic on the nails of a cat is a lot more ethical than permanently removing the nails of a cat. Many owners that can’t tolerate clawing as a natural behaviour would leave their cat at a shelter, and the fact behind that is 80% of cats are not re-homed, leaving them to be euthanised. Euthanasia should be avoided at all costs, if Soft Claws can prevent the re-homing of cats, then I believe that it has a place in the market. 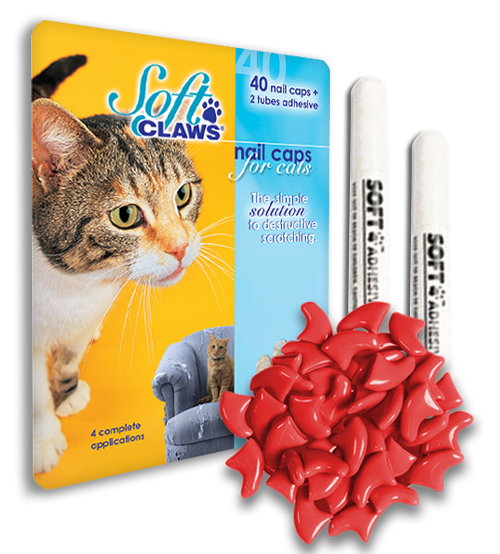